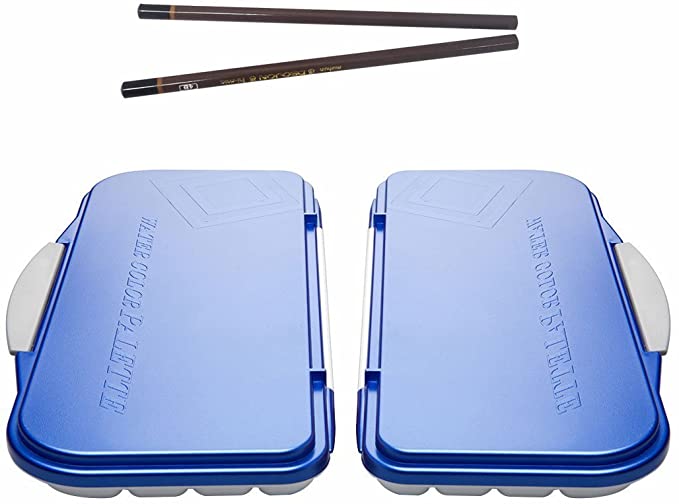 The Mijello Fusion 18 palette is a versatile palette, with a compact size that is easy to carry. The palette features a clear mixing tray on the top lid, and two white mixing areas on the lower section. Mijello claims that this allows you to mix true colours. After testing it, there were no problems with colour distortion from palette to paper. The palette features 18 wells for different colours, that are on a slight slant to prevent the paint from running out of them. The palette also claims to be airtight, which prevents your paint from drying out into hard lumps. If this happens it can be difficult to work with. The palettes used for this review were bought as a pair with 2 drawing pencils. The first thought, is why have 2 palettes? After filling the first palette with 18 colours, it quickly became apparent, that the second palette can make a great backup. The pencils are also a nice touch. Everyone needs more drawing pencils, especially if you’re a watercolour artist.

In terms of portability there’s no ideal solution between fluidity, and preventing unwanted mixing of colours. For this review the palette was taken out in the field, to see if the colours would stay in place while the palette was vertical. The paint was allowed to dry for a few hours, but without giving it the time to harden completely. Some of the watercolour paints can be very liquid when first released from the tube, and are certain to spread while in this state. The drying time allowed a thin skin to form and keep the paint in place without compromising it’s mixing properties.

The result  of this test was that most of the colours stayed in place. Two of the colours caused a bit of a spectacular mess by mixing with their neighbours.  Overall this is a good result, but could be more due to the liquid properties of the paint rather than the palette. Keeping the palette horizontal will ensure that it will certainly help to keep the paint from mixing.  Over time the colours do tend to firm up, and the mixing occurred with a full palette of freshly squeezed paint. It generally works well for plein air painting, and studio work alike. When carrying the palette vertically there’s always the possibility of unwanted colour mixing.

The design of the palette is slim, with a blue or pink lid and white plastic base. It’s probably aimed at the beginner to intermediate painter rather than the advanced artist. The appearance can be a bit deceptive because the inside of the palette is really quite advanced. Elements such as the clear mixing tray in the lid, white base, and slanted paint wells make for a well thought out design.

The outer appearance is a bit generic and unsophisticated. It looks like it would be at home in school bag with text books, rather than an artist’s kit. It has a couple of geometric squares on an angle, with the words “WATERCOLOUR PALETTE” embossed on the lid. Surprisingly there’s no branding, but maybe it’s because the palette is aimed at the younger artist wanting a generic palette. As a studio palette the layout makes painting easy, and the colour mixing trays are also very easy to use. The arrangement of the paint wells and tray make it easy to switch between the two. This experience was quite different compared to painting with a conventional palette.

The size is ideal, with 18 colours allowing a large selection of hues, without the feeling of having too many. The top clear tray is excellent for washes, and the lower mixing areas work well for heavier pigments, and more detailed work. The paint doesn’t bead or shrink at all when mixed. Overall it performed very well in terms of painting.

The other feature, and possibly the main feature of this palette is its airtight capability. Does it really keep paint fluid and prevent it from drying out? Overall it does, but it’s not going to keep it exactly like tube paint for a great length of time. After a few weeks of use some sparsely used colours do tend to dry out. The airtight seal enables you to get the most out of your paint tubes, but you should try not to cover the seal in paint. The paint can cause the lids to stick together if you’re a bit of a messy painter. Of course it’s also easy to fix by wiping over the seal with a damp cloth.

One thing to be aware of is the level of moisture content within the palette itself. It’s best not to leave large amounts of water in the trays, as if left for any length of time it can cause some colours to develop mould. The front of the palette has a latch that will keep the lid sealed when not in use. The latch keeps the palette well sealed so there’s no chance of leakage. So that’s about it for the Mijello Fusion 18 palette review. Thanks for reading, don’t forget to subscribe, and happy painting.